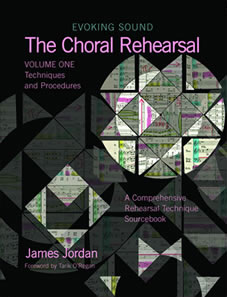 This comprehensive and engaging sourcebook is an essential guide to a productive and musical choral rehearsal written by a leading voice in choral pedagogy.

Intended for choirs of all skill levels, The Choral Rehearsal: Volume 1 covers a wide range of subjects and features sections devoted to:

In this ambitious and comprehensive—yet practical—text, James Jordan and a team of expert contributors give practical insights drawn from many decades of experience in the rehearsal room. Just a few of the topics covered in this volume include approaches to teaching rhythm, using recording technology as part of the rehearsal process, introducing your choir to IPA, incorporating Dalcroze and Laban methods into the rehearsal, and the count-singing system of Robert Shaw.

This book is destined to become a trusted companion to anyone seeking to make the most of the choral rehearsal.

"In my review of Jordan’s 2005 publication, Evoking Sound: The Choral Warm-Up, I wrote that ‘conductors at various stages of their careers will find the book appealing: it can be used as a choral methods text; it will be welcomed by beginning teachers; and even veterans may replenish their choral pedagogy with ideas and materials as systematized by Jordan.’ That is certainly and evaluation that can be applied to Jordan’s new book, Evoking Sound: The Choral Rehearsal, Volume One: Techniques and Procedures is highly recommended."

"I would recommend this book to all choral conductors who wish to enrich the sound and musical understanding of the choirs they conduct."

James Jordan is senior conductor at the renowned Westminster Choir College in Princeton, New Jersey. He is conductor of The Westminster Schola Cantorum and the school’s premier chamber ensemble, The Williamson Voices, which has premiered over 30 pieces in the past five years, quickly becoming a voice for composers of our time. He is also conductor of the professional choral ensemble, Anam Cara, heard on Innisfree (GIA ChoralWorks). One of the most influential choral conductors/educators in America, his many books covering rehearsal/teaching pedagogy, conducting technique, and spirituality of musicing have had a dramatic impact upon teaching/conducting.

This companion DVD to Evoking Sound: The Choral Rehearsal is a personal master class on conducting and rehearsal technique with James Jordan. Using the Pennsbury High School Chamber Choir as a model, Dr. Jordan illustrates the major points found in The Choral Rehearsal text. The DVD cross-references The Choral Rehearsal (Volumes 1 and 2), so those who study this DVD can read further about the highlighted points demonstrated in the books, including:

James Jordan is recognized and praised from many quarters in the musical world as one of the nation’s preeminent conductors, writers, and innovators in choral music.